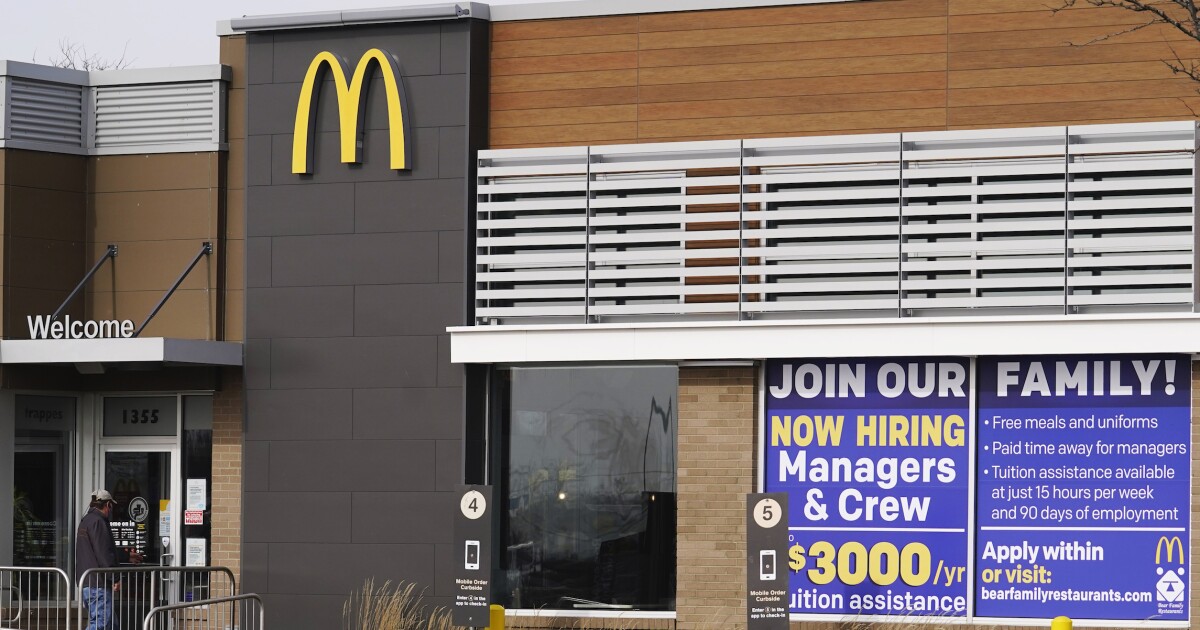 A McDonald’s franchise in Florida is so desperate for workers that it started offering people $50 just to show up for an interview — and it still isn’t getting enough applicants. Why?

In part because the system of ultragenerous unemployment benefits perpetuated by President Joe Biden’s $1.9 trillion-plus coronavirus legislation “is truly creating the incentive to not work right now,” the franchise owner told Business Insider. “And, how do you blame somebody? You can make more money on unemployment [than from working].”

The fiasco facing this McDonald’s isn’t an outlier. It’s an acute example of a national trend. Millions of people remain on unemployment benefits while there are nearly 7.4 million job openings. And there’s no shortage of employers looking to hire. A recent survey found that 40% of small businesses are struggling to fill open positions, some even after increasing wages on offer.

The labor market is clearly stuck in a dysfunctional rut right now, and it’s inhibiting our pandemic recovery. To get the economy going again, we need to roll back the Democrats’ current expansion of unemployment benefits so that welfare no longer pays more than work.

Under the status quo, the federal government is supplementing existing state-level benefits with an extra $300 per week until September. This means that nearly 40% of workers can earn more from staying on the welfare rolls than from returning to work. Many others can earn 70%, 80%, or 90% of what they were making.

In Massachusetts, for example, one can earn up to $1,100 a week on unemployment benefits under the current system. That’s far more than the $600 a week one would make working a $15/hour job. Is it any wonder so many employers are struggling to hire?

One of the most basic lessons of economics is that human behavior responds to incentives. We know that when the government places a tax on cigarette sales, for example, people smoke less. Similarly, when the government subsidizes higher education, more people will go to college.

What did lawmakers expect would happen when we subsidized unemployment and disincentivized working?

Some argue that it’s not really the benefits causing this hiring crisis, but workers’ fear of COVID-19. This might have been somewhat true last spring or summer. But the labor shortage is most acute in fields such as the restaurant industry, where workers were prioritized for vaccination months ago.

To be clear, it’s not just Democrats to blame for this dysfunctional unemployment system. It originated in the bipartisan CARES Act passed in March 2020, which had ample Republican support. Yet, Republicans in Congress have since tried to pare back the benefits, while Democrats have continued the status quo through party-line votes.

So, at this point, Democrats own it. And there’s simply no denying the dysfunctional results.

Even liberal economists such as former Obama adviser Jason Furman have conceded that this ultragenerous welfare subsidy can’t continue. It’s long past time for his fellow Democrats to listen. As long as unemployment benefits pay more than work, the economy will continue to slumber in a welfare state coma.

Brad Polumbo (@Brad_Polumbo) is a Washington Examiner contributor and host of the Breaking Boundaries podcast.