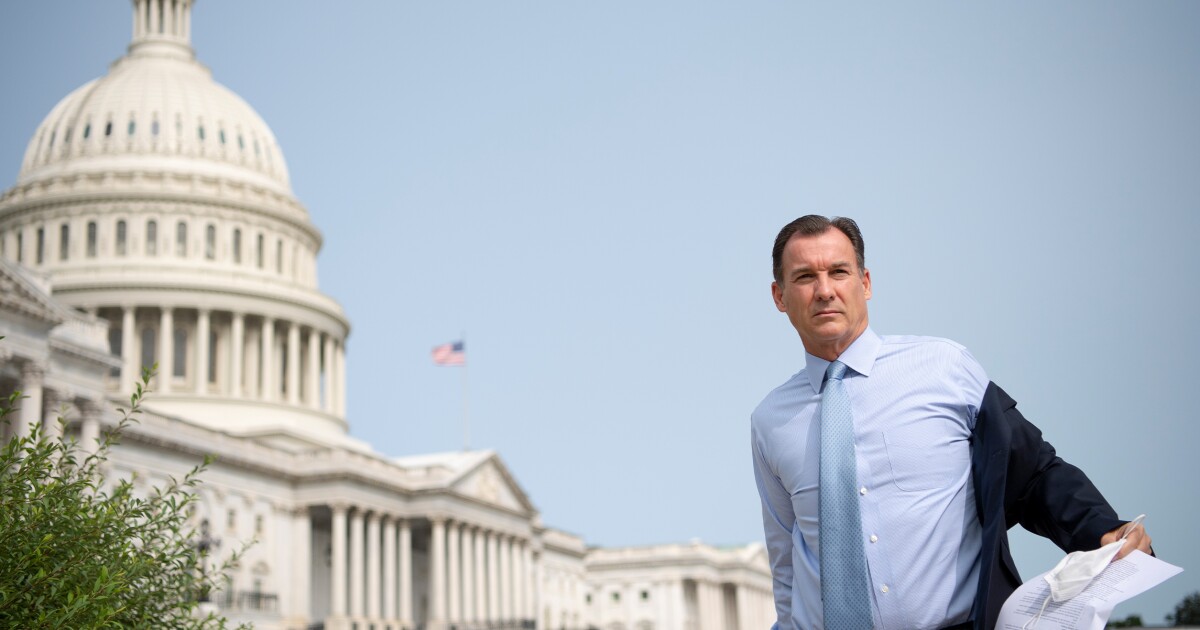 Rep. Tom Suozzi is a Democrat representing the 3rd Congressional District in New York. He is a member of the powerful House Ways and Means Committee, serving on both the oversight and tax policy subcommittees. He is also vice-chairman of the bipartisan Problem Solvers Caucus and formerly served on the House Foreign Affairs Committee and the House Armed Services Committee.

Suozzi, 58, previously served as mayor of his hometown, Glen Cove, New York, from 1994 to 2001, and as Nassau County executive from 2002 to 2009. He is trained as an attorney and a certified public accountant. He resides in Glen Cove with his wife Helene and their three children. Suozzi spoke to the Washington Examiner about the current debate over the economic future of the United States.

Washington Examiner: Everyone was moving in an upwards direction pre-pandemic in terms of income, wages, poverty levels, and that all happened under Trump’s watch. What would you say to Republicans and others who say that, that it has been a time of great prosperity and overall improvement by all economic measures?

Tom Suozzi: That’s just not accurate. I mean, there’s just too many people who are working hard every day that just are not making enough money that they can have a house, educate their kids, have health insurance, and retire without being scared. That’s just not accurate. Yes, there were some modest changes that came from low unemployment numbers and state-by-state increases in the minimum wage that created some very modest upward wages.

But, you know, globalization and technology are both relatively new phenomenon that have resulted in a humongous displacement of wealth. We’ve got to figure out how to balance our desire to be economically competitive and to continue to generate wealth as a whole, with our need to have a lot more of that wealth go towards working people. So, we have not been moving in that direction. There’s some modest improvements, but it has to be much more structural, I believe.

Washington Examiner: We have to make an apples-to-apples comparison, though. This fundamental structural shift toward more wealth going towards the middle class or the working class wasn’t happening under Obama’s administration, either. You have to compare this administration regarding what they’ve tried to do to previous ones.

Suozzi: I think that that’s a combination of factors. No. 1 is that I think that globalization and technology, like I said, are a relatively new phenomenon. But one of the reasons Trump won is because he spoke to these people that nobody’s been talking to them for a long time. And I think that was a big wake-up call for a lot of people. White, middle and lower middle and middle class, noncollege-educated people. And I don’t think the Democrats were speaking to them effectively. They may have thought they were talking to them, but they weren’t. I think a lot more Democrats have woken up to that reality. It’s something that needs to be addressed in our country. And it goes beyond just white, lower-middle-class voters to everybody who’s lower-middle class. It’s more economic than race-based. So, I think that Trump spoke to those folks. But he did so in a very ham-handed way and not really in a policy-driven way.

Washington Examiner: Some argue that if Trump is reelected, then we will go back to slow, incremental moves forward, that everyone will live better than they did before. How do you counter that people were arguably living their best lives, at least compared to the past 10, 15, 20 years, and that he could make their lives look like that again?

Washington Examiner: You think that the Democrats could do something different and be far more effective at creating change when it comes to healthcare and wages?

Suozzi: I think that Trump and Bernie Sanders and others have done a good job diagnosing the problems. But despite their good diagnosis, they have failed to give effective prescriptions to solve these problems. There is a problem that we simply haven’t addressed, which is the shrinking middle class. While Trump and Sanders speak to it in a populist way, the problem is these are very complicated problems that require much more sophisticated, nuanced approaches that balance the competing forces between our need to continue to have a capitalist society while looking out for those people that are not good competitors in the process. We need to have policies that uplift people that are not good competitors.

Washington Examiner: I mean, wages went up across every possible demographic. They rose at all levels, and especially for those at the bottom, those earning between zero to $20,000 or $20K to $50K and above $70K.

Suozzi: OK, so you made $20,000, and now, you’re making $21,000 — are you really thinking your life has improved? A lot of wages that went up at the lower levels, for example, someone making $30,000 a year is because specific states increased the minimum wage. That’s why wages at the lowest levels went up, not because of anything Trump did but because many states increased their minimum wage. And they took effect at the same time that he was in office. The problem is that the people who make $30,000 a year still won’t be able to buy a home, buy health insurance, and retire in security.