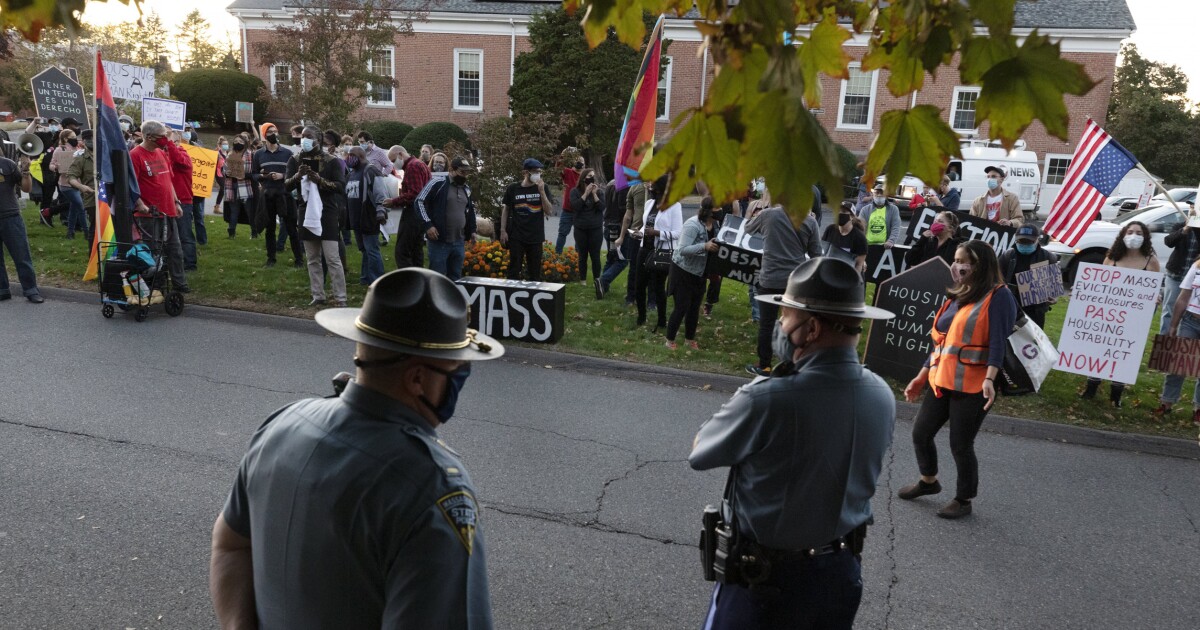 The eviction moratorium that has protected renters from being ejected from their homes has added financial hardship to an already explosive situation for one landlord.

“This is a really stressful, horrible situation that they have put us in,” said Tina Brown, a landlord of a row house in the Bronx, New York, about the eviction moratoriums that have been extended at the state and federal levels.

Brown’s three-story house consists of three apartments, one on each floor, and a basement apartment, where she resides.

Despite the moratorium, the renters in the top two apartments have continued to pay their rent because they have not suffered financially from the pandemic. The renter on the main floor, who Brown said is fully employed, has stopped paying the rent due to the moratorium.

Her mortgage has also fallen into forbearance since the moratorium, which means she can either pause or reduce her payments for three months. Brown has chosen to pay what she can to her bank, but she has extended the forbearance twice and is worried that the bank will foreclose on her property if she requests another extension.

“It’s a scary situation,” said Brown, who is currently unemployed and dependent on the rent from her tenants to pay for business and personal expenses.

Her financial predicament caused by the eviction moratorium only adds to Brown’s problems with this particular tenant, who was contacted for this article but did not respond.

In what could be a scene from the 1990 movie Pacific Heights, in which a tenant wreaks havoc on his landlord, Brown’s renter turned living in the basement apartment of her house into a nightmare.

“It’s like she has taken over the place,” Brown said.

For starters, water flows into the basement from the main floor, where the renter lives, but the tenant will not allow a plumber into the apartment to fix the problem. There is no water problem on the top two floors.

The water flowing into the basement has been constant enough for mold to grow and affect the electricity.

“The electricity is knocked out. It’s an unsafe environment,” said Brown, who added that to evict the tenant, she has to prove that the renter is causing the water problem, which she can’t do because a plumber is unable to enter the apartment.

“It feels that everything we look at and read, there are all these rights for tenants, but there are no rights for landlords,” she said.

The tenant and her grown children, who seem to live with her, also intimidate Brown and the other renters.

In one instance, the tenant and her children ignored Brown’s instruction to stop turning off the hallway light outside the main floor apartment that illuminates the stairs leading to the upper apartments. As Brown installed a faceplate on the light switch to keep others from touching it, the tenant’s daughter bumped into Brown hard while walking by.

“It’s bad enough that I can’t evict her, and I can’t put her out, but then she’s intimidating and harassing me,” she said, adding that her other tenants avoid her at all costs.

“They’re afraid of the element that she brings in here,” she said.

Brown recently presented her tenant problems to the Bronx Borough President Office, and a person from that office confronted the renter, who said she was about to move out. Brown didn’t believe it.

‘She had furniture delivered the other day. She has no intent on leaving, and she doesn’t have to leave,” she said. “Who knows how much longer she is going to be here?”

New York and the federal government extended their respective eviction moratoriums scheduled to expire on Dec. 31, 2020. The federal freeze on evictions now expires on Jan. 31, 2021. In New York, landlords like Brown will not be able to begin new eviction proceedings until at least May 1.

Brown expects that after all eviction moratoriums are permanently lifted, she will have to take her tenant to court to collect the back rent, which will be costly, time-consuming, and drawn out.

“This woman could be in this apartment for the next year without paying a dime,” Brown said.

Putting aside the tyrannical behavior of this tenant, Bob Pinnegar, the president and CEO of the National Apartment Association who is representing the interests of real estate professionals, including apartment owners, said it is landlords like Brown who are experiencing the full brunt of the eviction moratorium.

“Mom and pop landlords are really feeling the stress,” he told the Washington Examiner.

He also claimed false the notion that landlords have a stash of cash and can weather an eviction moratorium. Landlords earn roughly nine cents from every dollar collected for rent, according to Pinnegar. The rest goes to things such as the mortgage, paying staff, and building a reserve.

However, reserves and landlord profits are now being used to keep apartment buildings afloat since the rent is not collected. Pinnegar said he believes that roughly $70 billion in back rent will never be collected from tenants because of the eviction moratoriums that have occurred this year.

“When somebody is scraping to make ends meet and not able to pay rent on time because of COVID, how are they going to be able to pay back rent?” he asked.

Pinnegar added that he thinks providing an eviction moratorium was the wrong move because it prompted tenants to avoid contacting their landlord if they were having financial trouble and couldn’t pay their rent.

“During an eviction moratorium, we’re finding an increase in ghosting occurring where the residents don’t feel like they have to talk to the landlord or try to work something out,” he said.

Brown has experienced what Pinnegar has described. She has tried multiple times to speak with her tenant about the back rent and has never gotten a reply.

“I shouldn’t have to live like this,” she said.