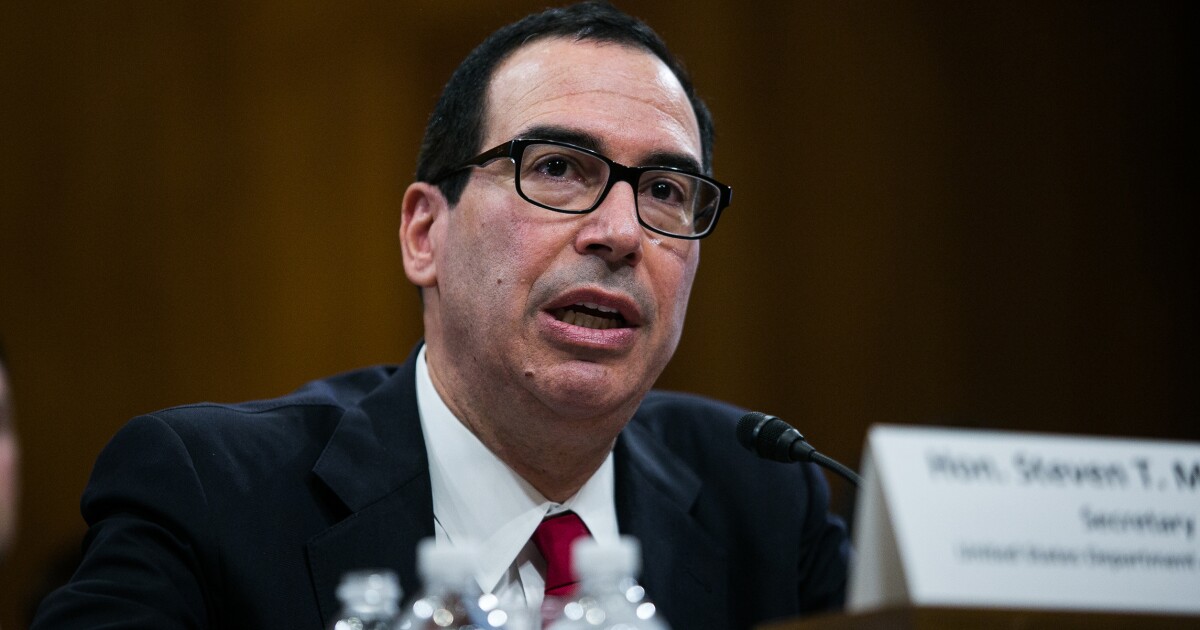 Treasury Secretary Steven Mnuchin on Thursday said that he would consider allowing federal workers to opt out of President Trump’s payroll tax deferral plan, an option that would entail logistical headaches for the government sectors participating in the program.

“I think that [opting out] is a reasonable issue if people don’t want to participate,” he told the Senate Banking Committee in a hearing on the CARES Act.

Mnuchin said he would consult with the White House’s Office of Management and Budget on allowing people to not participate in the program.

Permitting workers to opt out of the payroll tax delay would force employers to account for the preference of each of their employees. Currently, the federal government, minus the U.S. Postal Service and the House of Representatives, is essentially the only employer participating in the program.

There are approximately 2.1 million non-postal civilian workers and 1.4 million active-duty military personnel, according to the White House. Tracking each of their preferences would be a monumental task.

Trump, by memorandum in August, allowed employers to delay until next year the payment of their payroll taxes (not including the 1.4% Medicare tax) incurred between Sept. 1 and Dec. 31 for workers earning up to $104,000 a year.

The move equates to a 6.2% boost in take-home pay, but those taxes would be due in the first quarter of 2021.

Many, if not all, private employers have declined to participate in the plan.

Democratic Sen. Chris Van Hollen of Maryland, who sits on the Banking Committee, referred to payroll tax delay as a “shell game” since it does not provide any tax relief in the long run. He urged that workers should not be forced to participate in the program.

“You don’t force folks … to participate,” he said.

A likely reason behind the widespread rejection of the proposal is because it is risky for taxpayers who don’t have the money to pay the tax when it is due.

The inability to pay means taxpayers are not only saddled with the levy, but also with the interest and penalties that come with failing to pay what was owed on time.

The IRS has stated that interest and penalties on the “Affected Taxpayer” would begin accruing on May 1, 2021, which employers or workers would be responsible for paying.

“Under the statute, both employer and employee are responsible for remitting it. So, they can go after both parties,” said Garrett Watson, a senior policy analyst at the Tax Foundation, a nonpartisan think tank that examines the tax code.

“Employees are not off the hook. If the IRS can’t get it from the employer, they may decide to go after the employee,” he added.

Congress could forgive the deferred taxes, but so far, that does not seem to be in the offing.

“As far as the payback is concerned, you know, you could stretch that out for a long period of time. … You’ve got a lot of elbow room to get around that issue,” White House economic adviser Larry Kudlow said on Aug. 19.

“I can extend it at a certain period. Hopefully, I will be here to do the job,” Trump said after signing the memorandum on Aug. 8.