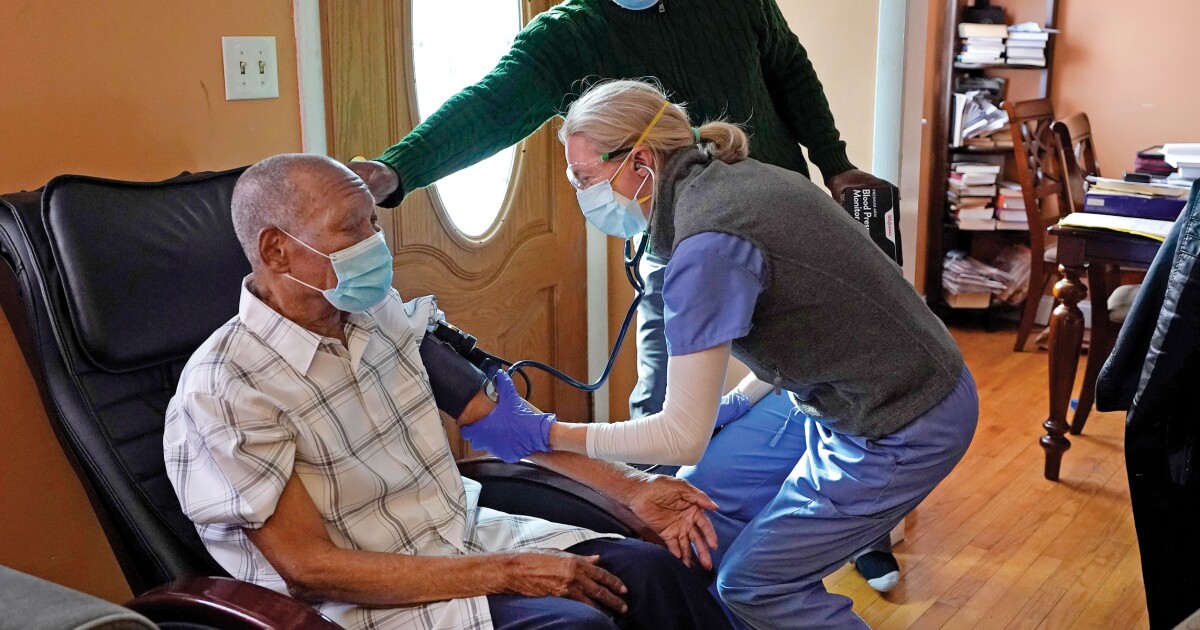 In late March, unveiled to an audience in Pittsburgh, President Joe Biden outlined his eight-year, $2 trillion American Jobs Plan. He promised that this “one-time capital investment” would pay off, because investing in infrastructure is “among the highest-value investments we can make.” But what, exactly, is infrastructure?

Until now, modern presidents have defined it as physical: dams, bridges, subway stations, school buildings. The White House wants to expand this definition to include everything from subsidizing electric cars to paying for home health aides. “Infrastructure” now means just plain old “spending” — quite a feat for a word that didn’t even exist in the American lexicon until after World War II.

“Infrastructure” is a new-ish term, at least in English. President Franklin Delano Roosevelt didn’t use it; he used the term “public works.” In 1934, in a speech to the state directors of the National Emergency Council, he said “the carrying out of public works” transcended local politics or local political machines, thus warning state officials — at least superficially, for the benefit of the voting public — not to use federal aid to solidify their political power. In his 1935 book, Back to Work, Roosevelt’s Public Works Administration chief, Harold Ickes, also refrains from using the word infrastructure and defined public works as roads, rail, water, power, public hospitals, and public housing. (Yes, the separate Works Progress Administration funded soft projects such as arts and culture, but nobody, at the time, confused the two.)

It wasn’t until the 1950s that infrastructure entered the nation’s vocabulary, and only then in a military context. In September 1951, the New York Herald Tribune's Walter Kerr reported from Paris that “a fourteen-letter word … has crept into the language of defense planners in recent months.” The French word was becoming “common” at Gen. Dwight Eisenhower’s post-war Allied command in Europe.

But it “meant so many different things to so many different people” that NATO issued a definition of what it was and what it wasn’t. Included in the term: air bases, depots, warehouses, barracks, pipelines, bridges, and training grounds. Infrastructure, essentially, had to be “fixed” in one place. “Troops are not ‘infrastructure,’ nor are their mobile weapons,” Kerr paraphrased. The New York Times chimed in the same month, preferring a joke to an etymological lesson: “Infrastructure. … N.A.T.O. term designed to make sure that the United States will foot the entire bill.”

The word was slow to catch on. Two decades later, the public only grew accustomed to reading it in the newspapers because the military was so intent on “neutralizing the Vietcong infrastructure,” as the 1971 Community Defense and Local Development Plan put it. “Infrastructure” was almost always something foreign, having to do with destroying it in a war or rebuilding it after a war or as part of decolonization. Military officials crowed at deteriorating Soviet infrastructure, and diplomatic officials pressed the need to help rebuild European infrastructure and, later, build African and South American infrastructure.

The term didn’t regularly appear to describe U.S. assets until the mid-1970s, finally leaping into popular usage as a legacy of the long Vietnam War. In 1974, a Times review of Robert Caro’s The Power Broker, about New York public-works czar Robert Moses, observes that “the physical infrastructure of the nation’s largest state lay essentially in the hands of one man.” Yet The Power Broker itself doesn’t use the word.

It took until the '80s for politicians and the press to use “infrastructure” regularly in the American civilian context. In 1982, reporting on what President Ronald Reagan still called a plan “dedicated to the rebuilding of our highways and bridges,” the Times characterized it as “repairing what has come to be called the infrastructure.”

Starting in the 1980s, though, the definition of “infrastructure” stayed stable for four decades. In 2014, President Barack Obama visited New York to push his $305 billion, five-year infrastructure bill, which passed Congress a year later. Behind him was a handy visual: “The old Tappan Zee Bridge. … At times, you can see the river through the cracks in the pavement. Now, I’m not an engineer, but I figure that’s not good.”

Even this definition of infrastructure, though, overstates the federal government’s role in paying for it. In most cases, people can pay directly for electric and gas infrastructure, for example, through a monthly metered bill, just as they can pay directly for the drinking water and broadband that comes into their homes and the sewage that goes out. Whether they choose to do so through a regulated, for-profit company, such as Consolidated Edison, or through a break-even municipal nonprofit provider, such as the New York City Water Board, is partly a matter of ideology, partly a random artifact of history. Airports, too, should largely fund themselves, out of airline and freight revenues.

The federal government’s role is to help pay for things for which it’s difficult to charge a direct user fee. For example, our vast network of roads and highways and the bridges that connect them; transit, which never turns a profit through direct user fees but sustains dense cities; and flood control, parks, and schools. Finally, the government must subsidize the cost of basic infrastructure for people too poor to pay direct fees for services such as broadband and power. It must also subsidize the general provision of such services in rural areas where it’s uneconomical for private companies to offer them.

Now, Biden and his supporters are making the next lexical jump, taking what was once an arcane word for physical assets and transforming it to mean anything the government deems worthy of spending. In his March speech, the president talked about “our roads, our bridges, our airports.” But his actual plan is different. Of the $2 trillion, $621 billion would nominally go to transportation. But $174 billion of this portion would go toward subsidizing electric vehicles, including half a million electric-vehicle charging stations. It’s not at all clear why the federal government should offer grants to car and truck companies or their fuel suppliers as they upgrade their technology to meet new mandates; the government doesn’t subsidize private gas stations.

Strip this out, and the bill offers just $447 billion for basic transportation infrastructure, including rail — or $56 billion a year, actually less than the Obama era’s $61 billion a year, even before accounting for a decade’s worth of inflation by the end of this proposed program. The proposal also includes hundreds of billions for power, water, and broadband, much of which the private sector could spend, but at least that is physical infrastructure.

The rest includes projects that simply aren’t infrastructure, at least under any definition until now: $400 billion toward “the infrastructure of care,” specifically, offering higher pay and better benefits to unionized home-healthcare aides; $213 billion to support the construction or preservation of private housing, much of it dependent on states and cities giving up their right to control their own land use; and $100 billion for “workforce development,” that is, education.

Some of this may be worthy. Healthcare aides are among the worst-paid people in the country. But this proposal doesn’t belong in an infrastructure budget. Neither is it a one-time investment, as the president insists, but rather the beginning of a permanently higher national healthcare bill. It belongs on the government’s regular, annual Medicare and Medicaid tabs. New “workforce” funding falls into the same category, permanently higher education spending, and thus belongs in the discretionary annual education budget.

Why call it “infrastructure,” then? As Biden himself said, “Historically, infrastructure has been a bipartisan undertaking, many times led by Republicans. It was Abraham Lincoln who built the Transcontinental Railroad; Dwight Eisenhower, Republican, the interstate highway system. … I don’t think you’ll find a Republican today … who doesn’t think we have to improve our infrastructure.” The word the French bestowed on us seven decades ago, then, is now the word that no one dareth question.

Nicole Gelinas is a contributing editor to the Manhattan Institute’s City Journal .