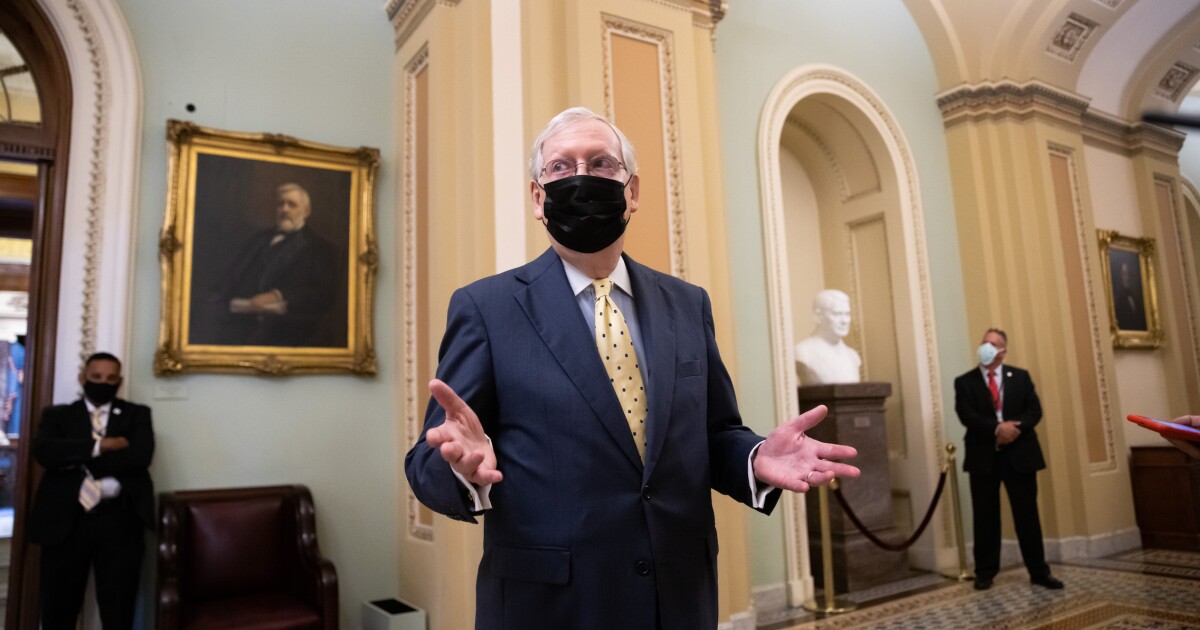 Senate Republicans are scrambling to unify their conference around a narrow coronavirus aid package Majority Leader Mitch McConnell will bring up for a vote on Thursday.

“I’m optimistic that we’ll have a good vote on our side,” the Kentucky Republican told reporters after a closed-door meeting with GOP senators. “I would hope this would appeal to some Democrats.”

The GOP measure is tailored to draw in support from the dozens of Republicans who opposed a $1 trillion GOP proposal introduced in July. It would slash the top-line cost roughly in half and use more than $200 billion from previous coronavirus aid that has not been allocated yet.

A unified GOP vote on the bill would strengthen the party’s position in a weekslong battle with Democrats on a spending compromise.

Republicans entering the meeting Wednesday told the Washington Examiner they plan to support the narrow bill, including Sen. Mike Lee of Utah, a conservative who typically opposes big spending bills, and Sen. Ron Johnson of Wisconsin, who rejected the $1 trillion measure.

“Based on what I’ve seen, I would vote for it and would encourage all 53 Republicans to vote for it,” Johnson told the Washington Examiner.

And while the slimmed-down measure will attract more GOP votes, Republicans said they are not sure all 53 senators in their party will back it or even enough to provide a 51-vote majority.

Sen. Rand Paul, a Kentucky Republican, said Tuesday he won’t vote for the bill, even though part of it is paid for with unspent coronavirus aid previously approved by Congress.

“We may not even have all of the Republicans on board with this one,” Sen. Mike Rounds, a South Dakota Republican who backs the measure, told the Washington Examiner after leaving the meeting.

Republicans are hoping enough senators, including at least seven Democrats, will support the bill in order to clear a 60-vote threshold needed to proceed to debate.

No Democrat has announced support for the measure, and Democratic leadership is firmly opposed to it. Democratic leaders are seeking at least $2.2 trillion in spending, which is more than 4 times the cost of the latest GOP proposal.

Senate Minority Leader Chuck Schumer, on Wednesday, called the GOP proposal “stingier and even less appropriate for the current crisis.”

Among the missing spending items Democrats seek is about $1 trillion in aid for state, local, and tribal governments to make up for tax revenue lost during the coronavirus-related shutdowns.

The New York Democrat cited “poison pill” provisions in the GOP bill that would provide lawsuit liability protections for schools and businesses and grants for homeschooling and private school tuition. Democrats oppose those provisions, which Schumer said would serve to protect corporations and steer money from public to private schools.

Schumer said Wednesday Mnuchin recently offered to compromise on a package that would cost $1.5 billion, which is at least 3 times the cost of the latest GOP proposal. Democrats said even the Mnuchin offer fell short and predicted a new round of negotiations will begin after the GOP bill fails to clear the 60-vote threshold on Thursday.

“They may be forced to come back to the table because COVID is the major issue that’s facing the Americans,” Schumer said.