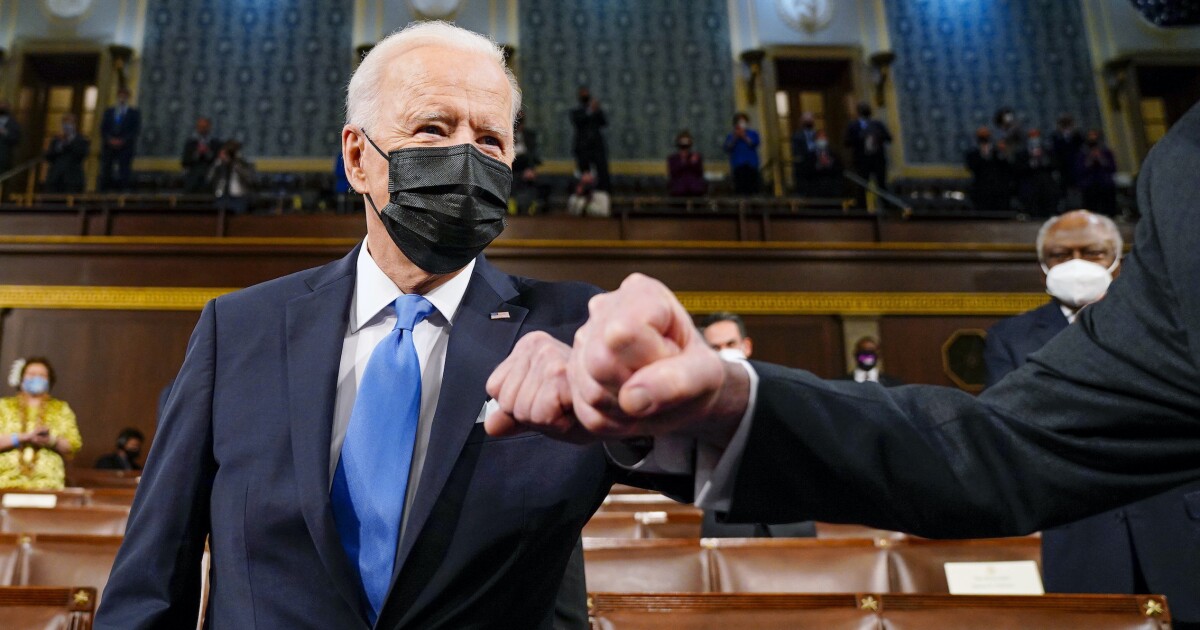 President Joe Biden was interrupted by a heckler who appeared to be objecting to prisoners being held in privately run detention centers, with the chief executive telling the man he is aiming to close them all amid pressure from the Left he has not moved quickly enough to do so.

“I agree with you. I'm working on it, man,” Biden told a drive-in rally on Thursday evening in Duluth, Georgia. “Give me another five days.”

“There should be no private prisons,” he said. “And we are working to close all of them.”

A man could be heard yelling, “End detention now,” later pleading with Biden that “we voted for you, Joe.”

Biden was referring to an executive order he signed to close all private prisons run by the Justice Department. But even his supporters say that was not enough because a slew of other federal agencies also use detention centers run by private companies.

It is merely one of a list of issues on which experts say Biden will continue to feel pressure from his most liberal faction as he clears his 100 days “honeymoon” period, during which most presidents have been given something of a break by opponents and allies. That ends on Friday, day 101.

To the sound of honking horns throughout, the president, as his No. 2 did earlier in Maryland, led something of a pep rally that doubled as an infomercial for two massive jobs and infrastructure packages he contends would help upgrade roads and bridges while also providing child care and other federal help to families.

Like he did the night before, Biden described the country as “on the move” and starting to move out of the pandemic. He again called for unity, but GOP members say he has shown little willingness to negotiate major legislation meaningfully.

“We just have to remember who we are: We are the United States of America,” he said. “And there's nothing we can't do if we do it together.”

Yet, GOP lawmakers are staunchly opposed to his plans’ proposed tax hikes for wealthy people and large corporations, as well as both bills’ price tags — well over $1 trillion after Democrats’ already made a $1.9 trillion coronavirus-response measure into law.

The president was back in Georgia a day after his first address to a joint session of Congress to sell two massive spending plans in a state that he turned into a battleground by turning it blue in November.

Karine Jean-Pierre, a White House spokeswoman, told reporters on Air Force One earlier in the day Biden was in Georgia to talk about his various legislative packages pending on Capitol Hill and the $1.9 trillion COVID-19 spending package he signed into law earlier this year.

“This trip is really … about the American people” and the president’s desire to “really do the big once-in-a-generation investments in kids,” Jean-Pierre said, describing his sales pitch for the bills as trying to “create jobs” while arguing the $1.9 trillion measure “really hit the moment.”

A Labor Department economic update released earlier Thursday found the U.S. economy grew at 1.6% in the first quarter and at a 6.4% yearly rate. That trend, if it continues, could put the economy back at pre-COVID levels this summer, some economists say.

Biden stepped onstage to honking horns from supporters with a 57% approval rating, according to the nonpartisan Gallup organization. A CNN-SSRS survey put his approval at 53%, with 59% saying he is doing a solid job at keeping his campaign promises.

The Gallup approval rating puts Biden on par with former presidents such as Bill Clinton and George H.W. Bush. At the end of April of their first years, Clinton’s approval stood at 55% and the elder Bush’s at 58%, according to Gallup.

His most recent predecessor, former President Donald Trump, had only a 41% approval rating at the same point in his term, with George W. Bush standing at 61% and Barack Obama at 63%.

But deeper within the Gallup survey are clear signs of the country’s divisions. Ninety-four percent of Democrats approve of his job performance, compared to just 11% of Republicans.

The CNN-SSRS survey found a similar divide on Biden’s handling of the coronavirus pandemic, with 66% of those surveyed approving of his COVID-19 response — a 6-point hike since March. But only 30% of Republicans voiced approval, compared to nearly all Democrats surveyed (97%).

Still, that is 16 points higher with Republicans than on any other issue. And that is a big reason why Biden and senior White House officials are pushing two more massive spending plans, his $2 trillion “American Jobs Plan” and his $1.8 trillion “American Families Plan.”

The president and his team are arguing both are needed to give the economy two more jolts as the COVID-19 pandemic begins to fade as more and more people get their vaccines. They’re also contending that that level of support among Republicans on the issue amounts to enough bipartisan support beyond the Washington Beltway to justify passing the pending packages with a single GOP vote.

Earlier in the day, Biden’s No. 2 also stumped for the plans.

“America is once again on the move,” Vice President Kamala Harris said, echoing the president’s assessment of the country the night before in his first address to a joint session of Congress amid signs the coronavirus pandemic is fading. “We see light at the end of the tunnel.”

But Republicans are holding firm against the two pending measures like they did with the earlier $1.9 trillion COVID spending bill.

“The president talked about unity and togetherness,” Senate Minority Leader Mitch McConnell said Thursday, “while reading off a multitrillion-dollar shopping list that was neither designed nor intended to earn bipartisan buy-in.”

“It's more taxing and more spending. I think Joe Biden has promised to unify the country and heal our division, and it certainly hasn't been demonstrated, nor is it, I think, been demonstrated by his legislative proposals,” said Sen. John Cornyn of Texas.