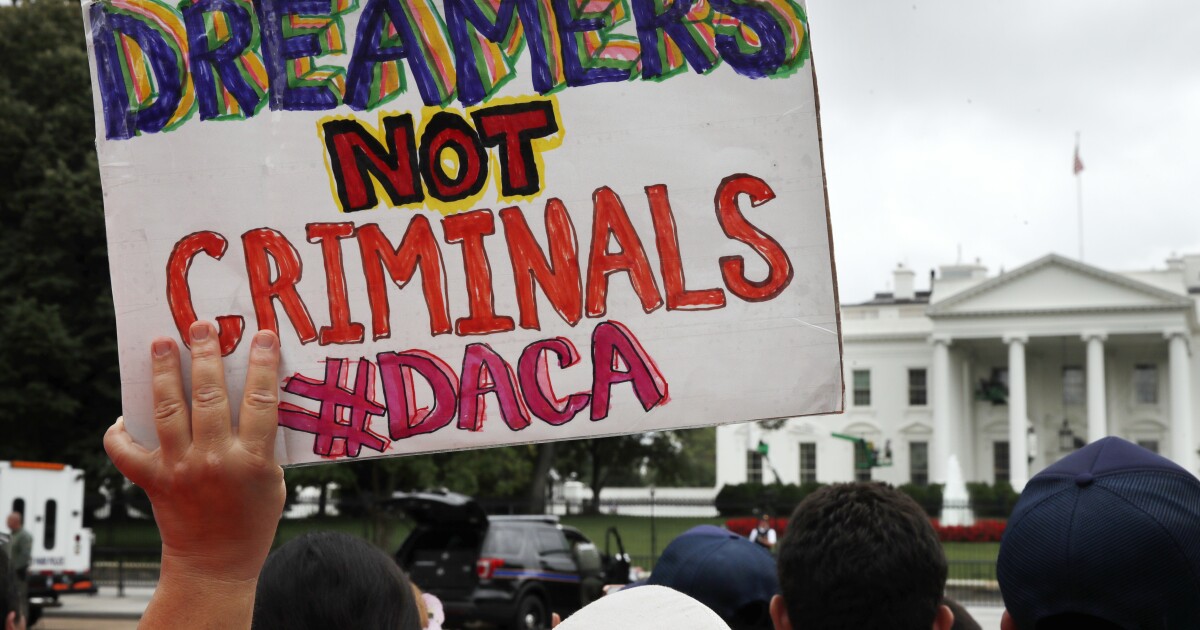 The Center for American Progress claims that recent policy changes at the Department of Homeland Security “could potentially undo the gains that DACA recipients have made.” Yes — and water is wet.

No one doubts that those granted temporary lawful status under the Obama administration’s Deferred Action for Childhood Arrivals program benefited. After all, they weren’t deported. But what the CAP study ignores is that those gains often come at the expense of U.S. workers and taxpayers.

Some background is important. Without any constitutional or statutory authority to do so, President Barack Obama in 2012 directed DHS to create the DACA program. In effect, it granted a two-year amnesty to illegal immigrants who arrived in the United States before their 16th birthday, had resided continuously in the U.S. since June 15, 2007, and were under the age of 31 as of June 2012. This administrative amnesty was renewable and included work authorization and advance parole.

Advance parole allows an illegal alien to apply for permission to leave the U.S. and return. This benefit quickly became a loophole DACA recipients exploited to become lawful permanent residents. After leaving the country with an advance parole, they would be “admitted” back and could apply for a green card, as DHS overlooked their illegal behavior of sneaking into the country.

This June, a 5-4 U.S. Supreme Court majority ruled that DHS had the authority to rescind DACA but had not given an “adequate” explanation for its decision to terminate the program. DHS subsequently announced that while it was considering full rescission of the program, it would: reject all new DACA requests and associated applications for Employment Authorization Documents; reject new and pending requests for advance parole (absent exceptional circumstances); and limit the period of renewed deferred action to one year for those cases granted relief subsequent to the July announcement. The first two items merely continued what has been DHS policy since 2018. Only the policy shortening the renewed deferred action period from two years to one was new.

Now, back to the CAP report. It repeats the same claim it has made after each of its five previous annual surveys: that “DACA recipients are contributing significantly to society and the economy.” What’s new is its claim that the DHS policy changes following the Supreme Court decision may undo DACA recipients’ economic and educational gains because they cannot afford the cost of applying to renew ($495) each year versus every two years.

This odd assertion directly contradicts CAP’s conclusion that DACA recipients do better financially because they work better jobs and receive higher wages than those without DACA status. An extra $500 every two years seems a small price to pay (less than $5 per week) for such success.

The Center for American Progress routinely uses its annual survey to argue that DACA recipients should receive amnesty. Of course, giving Dreamers express permission to stay, work authorization, and other benefits such as driver’s licenses and college tuition makes life “normal” for illegal immigrants. Thus, they argue, the express permission to stay in the U.S. should be made permanent by giving “normalized” immigrants green cards.

But what amnesty advocates like CAP omit is the fact that illegal immigrants do take jobs away from Americans and that wages are depressed in some industries because illegal immigrants will charge less for their labor. Nor does CAP accurately discuss the high fiscal costs of illegal immigration paid by U.S. taxpayers at the local, state, and federal levels.

Pew Research last year reported that 7.6 million illegal immigrants work in this country. Numerous studies — from the General Accounting Office, the U.S. Commission on Civil Rights, the National Research Council, and more — have shown that such large numbers of illegal immigrants in the workforce depress wages.

Studies have also shown that the taxes paid by illegal immigrants are far less than their costs to U.S. taxpayers. These costs include: direct benefits such as Social Security, Medicare, unemployment insurance, and workers’ compensation; means-tested welfare benefits; K-12 public education ($14,439 per student); and population-based services such as police, fire, highways, parks, etc.

While those with deferred action and work authorization may benefit financially from their illegal entry into this country, U.S. citizens who must compete against them for jobs and taxpayers who must fund their government benefits do not.

The Center for American Progress and other open border advocates seek to normalize illegal immigration in the U.S., but it is not a victimless crime. Those who enter and remain in the country illegally should not be rewarded with legal status or other benefits. Condoning such behavior not only hurts large segments of the citizenry, but it also encourages further illegal immigration, thereby perpetuating this adverse spiral.

Lora Ries is a senior research fellow for homeland security at the Heritage Foundation.