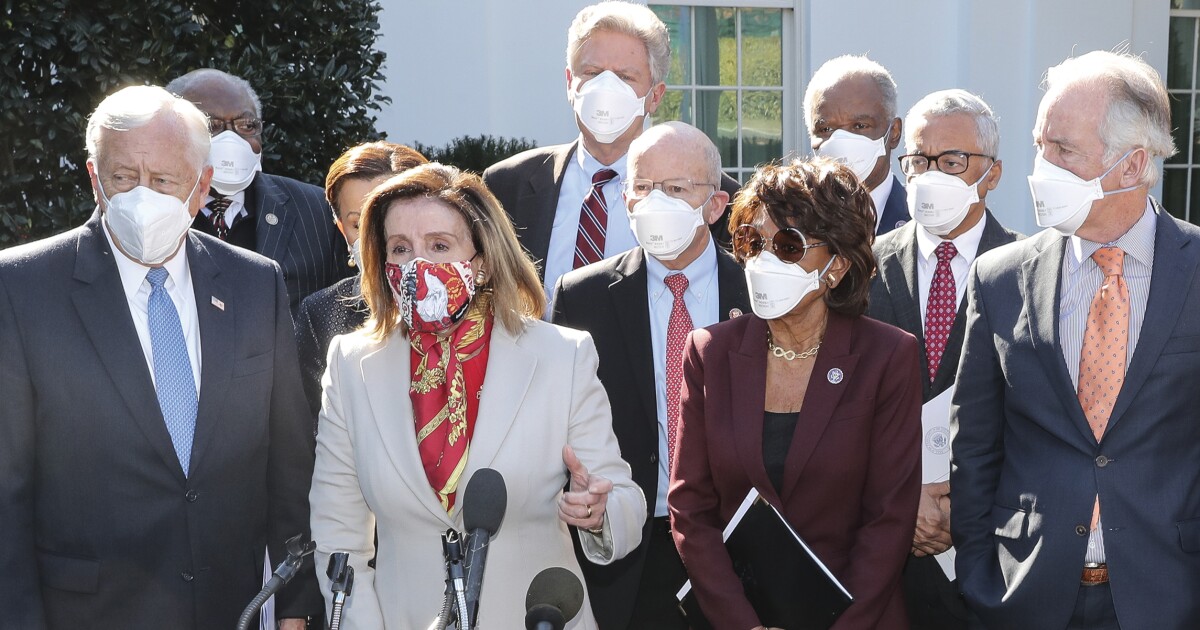 While the Senate and the nation were glued to former President Donald Trump’s impeachment trial, House lawmakers plowed ahead on a massive coronavirus aid spending package and minimum wage hike. They want President Biden to sign it into law before the middle of March when enhanced unemployment benefits expire.

House committees, run by Democrats, advanced the $1.9 trillion measure in pieces. Simultaneously, across the Capitol, House Democratic impeachment managers prosecuted the case against Trump, charged with inciting an insurrection that led to the Jan. 6 attack on the Capitol.

Senate Democrats emphasized their work on the aid bill even as the party worked to convict Trump in the Senate trial.

“It was said a few weeks ago in all the punditry and everywhere else that the impeachment trial would throw a wrench into President Biden’s early agenda,” Senate Majority Leader Chuck Schumer, a New York Democrat, told reporters. “We are here today to say, ‘We are not letting that happen.’ We can do both at once.”

Democratic leaders fear a dragged-out trial would hold up the Senate too long, preventing lawmakers from voting for the latest round of coronavirus aid and other party priorities during Biden’s critical first 100 days in office.

They moved to wrap the trial, likely without new witnesses, quickly and with a vote on convictions within a week.

A faster timeline ensures the Senate floor will be open when the House sends over the aid package, including a new round of $1,400 stimulus checks and an extension of enhanced unemployment benefits.

The House is expected to send the legislation to the Budget Committee next week and then to the floor for a vote.

Then it will be up to the Senate to pass the measure using a special budgetary tactic called reconciliation that will require only 51 votes instead of 60.

“We hope to have all of this done and certainly on the president’s desk in time to offset the March 14 decline when some of the unemployment benefits expire,” Speaker Nancy Pelosi, a California Democrat, said.

Democrats plan to add a provision to raise the minimum wage to $15 an hour, which could run afoul of budgetary rules eliminating the 60-vote filibuster.

It could slow down the process or get blocked entirely because it does not directly affect the federal budget, which is required for passage under reconciliation.

But Democrats said they are going to push to include it in the legislation.

“We are very proud of that,” Pelosi said. “Millions of people will get a raise. Seventy percent of them are women, and we will be sending that.”

Most Republicans are poised to vote against the measure over the cost and scope.

Democrats rejected dozens of GOP amendments, including one that would have phased out enhanced unemployment benefits, another to incentivize workers returning to jobs, and another aimed at reopening public schools.

“Last Congress, Republicans and Democrats came together on five separate occasions to deliver several trillion dollars in relief for Americans,” McMorris Rodgers wrote. “There is no reason to abandon bipartisanship now.”