Home Business Can we find happier times by selling more to the rest of...

With happier economic data arriving almost daily, the optimists among us might think that a return to normal prosperity is just around the corner. But getting over the top of the hill is sometimes the most difficult part of the climb.

Construction activity (especially homebuilding) is moving with a full head of steam, manufacturing is on the rise (though struggling to keep supply chains pumping), and some measures of consumer confidence are staying in the green. To top it all, we now have the first estimate for third-quarter GDP growth. As expected, it’s big (a 33.1% increase driven heavily by consumer spending) but still not enough to offset the earlier negative growth numbers.

We must remember that growth rates can be very large when an economy is coming back from the grave. There is some evidence that the rebound, though still alive, is wearing thin and that perhaps the resurging virus is taking some wind out of the sails.

While the domestic economy is looking better and consumers are armed with an unusually large amount of cash (thanks to the CARES Act, Payroll Protection Program loans, and other state and federal financial support) a complete return to solid pre-virus ground will require some help from the rest of the world. In a word, U.S. exports, like the overall economy, will have to claw their way out of the grave, and the prospects for that happening anytime soon are not very bright.

The problem here has two parts. First off, as shown in the below chart, U.S. export growth reached a peak in the second quarter of 2018, well before the coronavirus pandemic, and at about the time that the Trump administration’s tariffs began to hit the rest of the world. The rest of the world then retaliated. Put another way, loss in world market activity was deliberate U.S. policy. Addressing that part of the export losses requires a change in tariff policy, and that means revised White House thinking and time for the readjustment to take place. 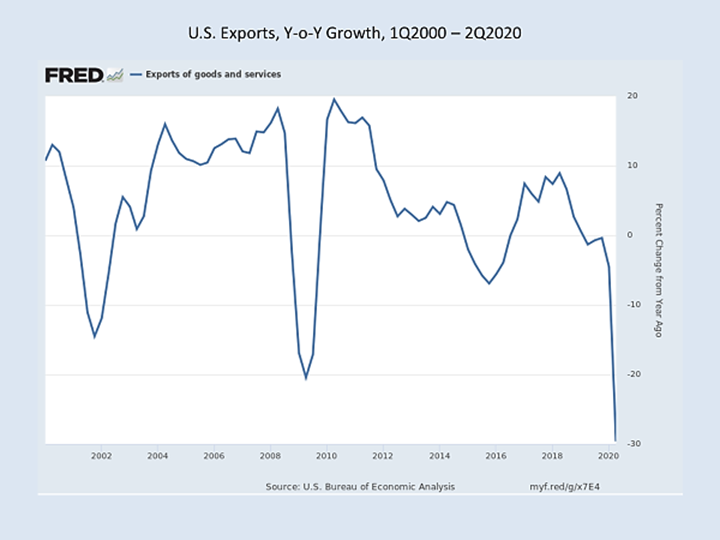 As the chart tells us, export growth continued to head south after 2018 until the second part of the export problem hit. That, of course, was when the pandemic reduced world economic activity.

By the way, a glance back to the recession of 2008 gives another reading on how quickly exports can fall and, hopefully, recover. “Hopefully” is the operative word here. The 2008 collapse was triggered by a major financial collapse in world credit markets; the causes, unlike today’s recession, were man-made.

So, what are the prospects for worldwide consumers to increase purchases of U.S. exports?

One hint comes from another look at OpenTable’s data on what is happening to global restaurant activity, which is a proxy for the extent to which national and world economies are operating. As the below chart tells us, year-over-year growth in global restaurant activity was down almost 50% in late October. Of interest, the data reflect a wave-like structure that is driven by actions taken in different countries to restrict or reopen in-place eating and drinking. The current period doesn’t look too good, and that suggests (at least indirectly) a less-rosy outlook for U.S. exports, at least for a while.

There’s no doubt about it: The U.S. economy is now walking at a positive pace, but it is not trotting. It will take better times in the rest of the world for the pace here to begin to feel more like it normally does. And trade is just one part of the GDP-recovery puzzle that remains to be resolved. Other pieces include reducing peoples’ anxieties about their work prospects and social lives, and, yes, eventually being able to have dinner with friends at a good restaurant.