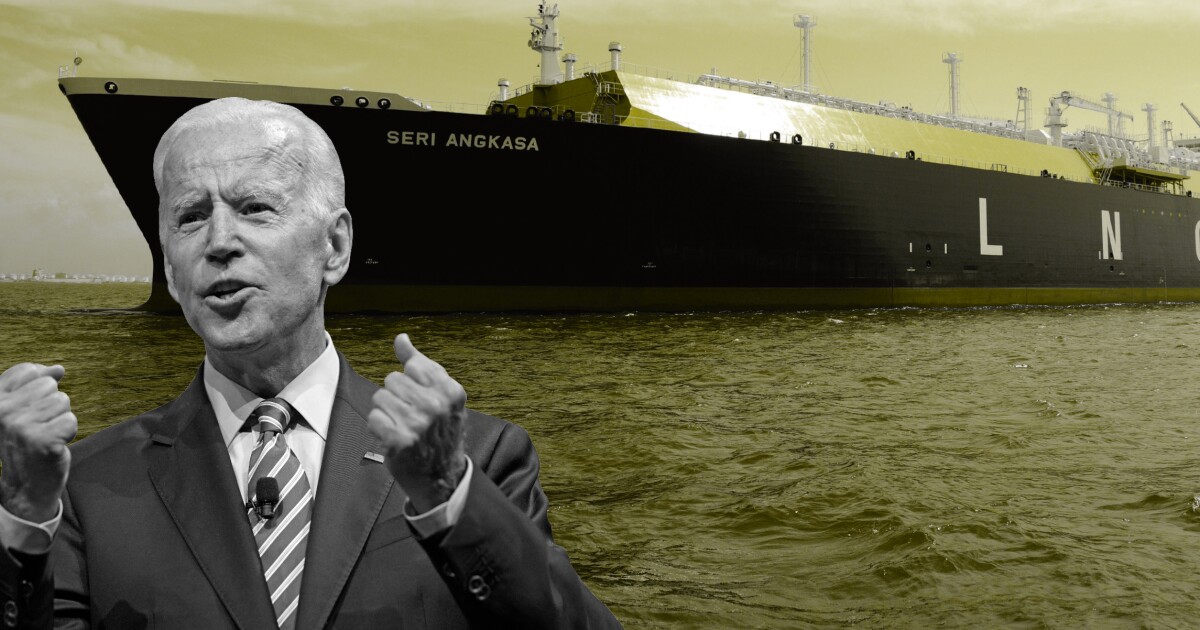 Joe Biden’s aggressive plans to address climate change are largely silent on how he would approach the issue of natural gas exports.

The Democratic presidential nominee has committed for the United States to use carbon-free electricity by 2035 and for there to be net-zero emissions across the entire economy by 2050, goals that would require phasing out domestic use of natural gas unless equipped with carbon-capture technology. He also proposes to ban new oil and gas development on federal land.

But Biden has been evasive on if he would promote natural gas use overseas, a key question since 85% of the world’s emissions come outside the U.S., and many developing countries are turning to gas as a cleaner alternative to coal.

In his only public comments as a presidential candidate, Biden said in a CNN town hall that he’d support banning exports depending on what “they’re replacing,” seemingly leaving open the possibility of exporting to countries switching from coal to gas.

While gas emits half the carbon as coal, environmentalists have drawn attention to the problem of methane, a potent greenhouse gas that leaks when companies produce and transport the fuel.

“The absence of a discussion on constraining LNG exports tells me they aren’t planning to do much here,” Rees said. “There’s an assumption his plans would lead to fewer fossil fuels, but exports is a big gaping loophole where it’s unclear if that’s true.”

Industry groups, meanwhile, are interpreting Biden’s reluctance to campaign against fossil fuel exports as a sign he’d follow the mold of the Obama administration, which supported shipping natural gas overseas when he was vice president and approved an initial batch of export terminals.

“Biden was a big proponent of LNG exports when he was vice president,” said Charlie Riedl, executive director for the Center for Liquefied Natural Gas, who said he has spoken with outside advisers to the Biden campaign. “I am hard-pressed to see how his policies shift that dramatically.”

“We are not afraid of a Democratic administration,” Hutchison said. “Joe Biden is a person who is truly connected to working people and organized labor, and he recognizes the importance of pipelines and export facilities and a lot of union jobs that go into that.”

The Trump administration aggressively moved to push exports of LNG, the chilled, liquid form to which gas must be converted for shipment in giant tanker vessels across the sea, viewing it as a geopolitical tool to diminish Russian influence in Europe.

The U.S. has become a top exporter of LNG, a significant development after the country was expected to become a big importer of gas before the shale boom.

But that momentum could be threatened by the coronavirus because large consumer markets, such as Western Europe and East Asia, are also suffering economic slowdowns.

For the first time, the IEA expects gas demand in advanced economies going into “slight decline” by 2040 as large importers adopt strict climate targets. Even China, a top importer of LNG, committed last month to reach carbon neutrality by 2060.

But the IEA still sees global gas demand increasing overall in the next two decades because of interest from South Asian and East Asian countries.

“Even major economies are still using coal today,” said Paul Bledsoe, a strategic adviser at the Progressive Policy Institute, who was a climate change adviser in the Clinton administration. “We have a lot of coal to squeeze out of our electricity systems still.”

Bledsoe and other analysts said Biden has an opportunity to position gas in a cleaner way by clamping down on methane emissions.

“It’s in industry’s interest to work with Biden to make American gas the lowest emitting in the world, bringing methane so low that U.S. gas can be marketed on climate change grounds,” Bledsoe said.

“If you are already on the fence on the value of gas as transition fuel, being able to say you are leader on methane helps you justify the investment of, production in, and trade of gas,” said Sarah Ladislaw, director of the Energy Security and Climate Change Program at the Center for Strategic and International Studies.

Riedl agreed that President Trump’s regulatory rollbacks have been a “detriment” to U.S. LNG suppliers.

U.S. LNG is already much cleaner than gas delivered by pipeline from Russia and competitors in the Middle East, but it’s still difficult for U.S. producers to monitor and detect leaks.

“As we see mandates coming from the EU, they are going to want to know our government is involved with reducing methane,” Riedl said. “If we do nothing, it’s definitely not out of the question to see in the not-so-distant future where there would be an issue for us.”

Riedl also said he’s hopeful Biden would repair relations with China. China imposed retaliatory tariffs on imports of U.S. LNG in response to Trump’s trade war. Beijing has not fulfilled promises to purchase billions of dollars of American oil and gas as part of a phase one trade deal with Trump.

“Trump has done a lot to raise the profile of U.S. LNG around the world, but Biden could open that market back up,” Riedl said of China.

“The days when you can simply assert that gas is better than coal and have that be the end of the conversation are well over,” said Mark Brownstein, senior vice president of the Environmental Defense Fund.

Rees acknowledged it’d be difficult to stop gas exports from seven U.S. LNG export terminals that have already been approved and are operational. But he said Biden’s agencies should not permit any new natural gas infrastructure, including pipelines that deliver the fuel to export facilities along the Gulf Coast. He also said Biden should ban gas exports from projects that have been approved but not yet built.

Biden has signaled he would make it difficult for developers to obtain federal permits to build fossil fuel infrastructure, committing in his climate plan “that every federal infrastructure investment should reduce climate pollution.”

“Those would be clear, sensible moves that make it clear gas exports are not part of the climate future,” Rees said.