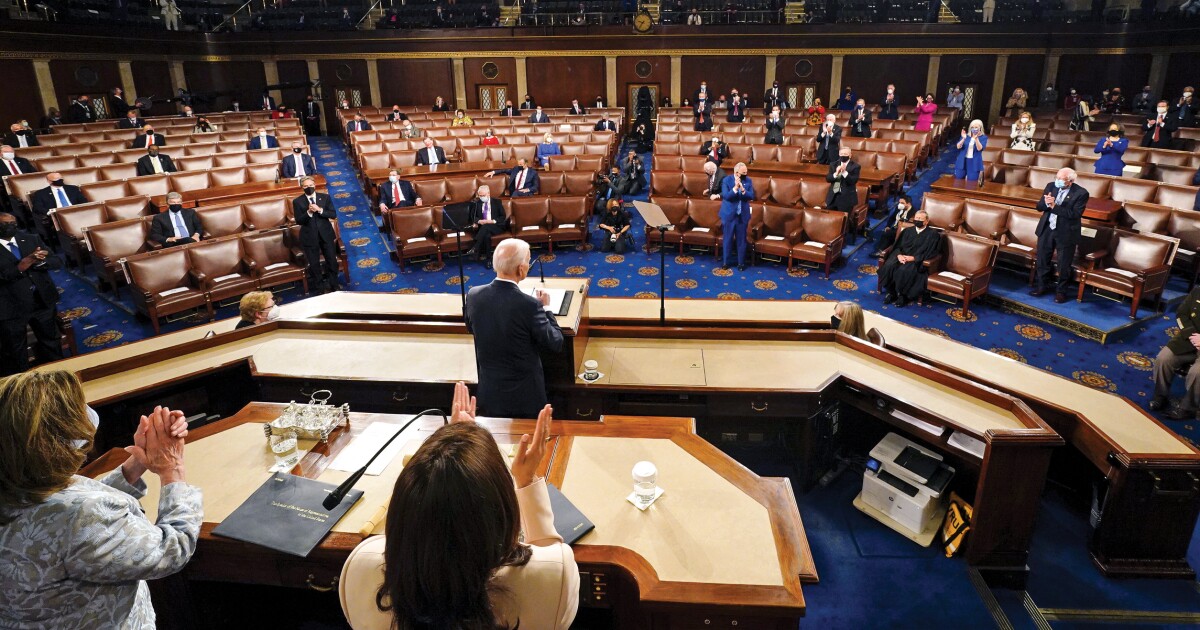 President Joe Biden mentioned bipartisanship only three times in his 8,000-word joint address to Congress, and the bulk of his speech was dedicated to achievements and proposals that Republicans widely oppose.

Biden's first address to Congress appeared to chart a course that Democrats had already been following: Unless the GOP largely agrees to the party proposals, the House and Senate will look for a way to pass them without any Republican support.

Republicans mostly refrained from harsh attacks on Biden the day after the low-key address that the president delivered to a dramatically scaled-back audience in the House chamber due to COVID-19 concerns.

But few Republicans could find any common ground in Biden's proposals for $4 trillion in new spending that would be partly paid for by reversing a significant portion of the GOP's 2017 tax cut legislation.

“I think the president is hard to vilify,” Sen. Roy Blunt, a Missouri Republican and veteran member of Congress who is not seeking reelection, said the day after Biden's speech. “I think he was well intentioned. I think he was warmly received, in a personal way. But the proposals he made are overwhelming, in terms of a new footprint for the government and a new level of government spending.”

Scott said the president promised to unify the nation but is achieving the opposite result with proposals that divide and legislation that circumvents GOP inclusion in Congress.

“We need policies and progress that bring us closer together,” Scott said. “But three months in, the actions of the president and his party are pulling us further and further apart.”

Senate Minority Leader Mitch McConnell, a Kentucky Republican, said the day after Biden's speech that he doesn't speak to the president.

“The reason we're not talking now is because he's not trying to do anything remotely close to moderate,” McConnell said on Fox News. “He ran as a moderate, but everything he's recommended so far has been hard left.”

Biden made a brief pitch for interparty cooperation during the speech when he addressed his plan to pass an infrastructure bill.

Republicans have primarily panned Biden's $2.3 trillion proposal, which GOP lawmakers say dedicates only a fraction of spending to roads, bridges, and other traditional infrastructure projects.

Biden has held meetings with bipartisan groups of lawmakers, and Republicans have said he has listened intently to their ideas as well as their criticisms of his proposals.

However, during the joint address, Biden appeared to send a warning to GOP lawmakers, even while praising a group of Republican senators who recently proposed their own $500 billion infrastructure measure.

“I'd like to meet with those who have ideas that are different, that they think are better,” Biden said. “I welcome those ideas. But the rest of the world is not waiting for us. I just want to be clear: From my perspective, doing nothing is not an option.”

Rep. Shelley Moore Capito, a West Virginia Republican who is negotiating with the Biden administration on an infrastructure compromise, said Biden's reference to the $500 billion GOP counterproposal indicated that he is interested in finding a bipartisan deal.

“He was pleased that Republicans put something forward,” Capito said. “He said, now let's get to it. So we are taking that as a positive sign, and my conversations back that up, too.”

But Capito said the GOP has made clear to Biden that Republicans do not agree with the scope and cost of Biden's spending plan.

Biden last week unveiled a $1.8 trillion proposal to serve as the second half of an infrastructure spending package.

The measure would be in addition to Biden's $2.3 trillion infrastructure bill, the American Jobs Plan, that Republicans already oppose because it dedicates too little to roads and bridges and instead focuses on green energy spending and other noninfrastructure initiatives, such as money for caregivers.

Biden called the measure “a once-in-a-generation investment in America itself.”

But Republicans believe the pandemic is ending and that federal spending must be recalibrated to a rebounding economy.

“His vision is way over the top of what I think is necessary,” Capito said.

Republicans also remain at odds over police reform, which is another top agenda item Biden addressed in his speech.

Congress has been negotiating a reform measure with far more intensity following the guilty verdict in the trial of Derek Chauvin, a former police officer convicted of killing George Floyd by kneeling on his neck.

Republicans oppose a Democratic bill that would eliminate qualified immunity for police officers, among other provisions.

“I know Republicans have their own ideas and are engaged in very productive discussions with Democrats in the Senate,” Biden said. “We need to work together to find a consensus. But let's get it done next month, by the first anniversary of George Floyd's death.”

Floyd died on May 25 last year. The talks have continued in Congress, but no deal is in sight, although Democrats and Republicans say they are making progress.

Scott is leading the negotiations for the GOP, and in his rebuttal to Biden's address, he noted that Democrats filibustered his police reform measure a year ago.

“I extended an olive branch,” Scott said. “I offered amendments. But Democrats used the filibuster to block the debate from even happening. My friends across the aisle seemed to want the issue more than they wanted a solution.”

Sen. Lindsey Graham, the top Republican on the Judiciary Committee, said the two parties are seeking “a sweet spot” on qualified immunity. Some Republicans want to shift legal liability away from officers and to police departments.

Sen. Cory Booker, a New Jersey Democrat and another critical negotiator, deflected a question about Biden's May 25 deadline for a police reform bill to pass Congress.